The holiday season hit and we were out of university for a good month or so. This doesn’t mean that I would sit back and relax.  Not only did I celebrate my birthday in December, the holiday season was pretty intense as well, so I wasn’t able to do any work further into December. But we’re now in January and I’m picking up all my work again.  Just to continue what I’ve started before.  My plan is still to start animating before the end of the vacation time so here’s the update.

Backgrounds.
I had not finished all the backgrounds yet, but at the start of January I did try out several things to set up the backgrounds, this includes transfering the backgrounds into a 3D environment so I would be correct with the perspective in the scenes such as the lake scene. Everything was a test, but it turned out pretty good.  When I’m back in uni, I will ask for feedback from my peers and tutors to see which would be the best way of approaching it, what is aesthetically more pleasing and more doable when it comes to animating.

This was a very early test in which I firstly wanted to make a reference for perspective in order to create my illustration on point.  The camera was placed in a way that it should be placed in the scene later in the animation as well, so I knew that the illustration would be spot on and leave no room for error. 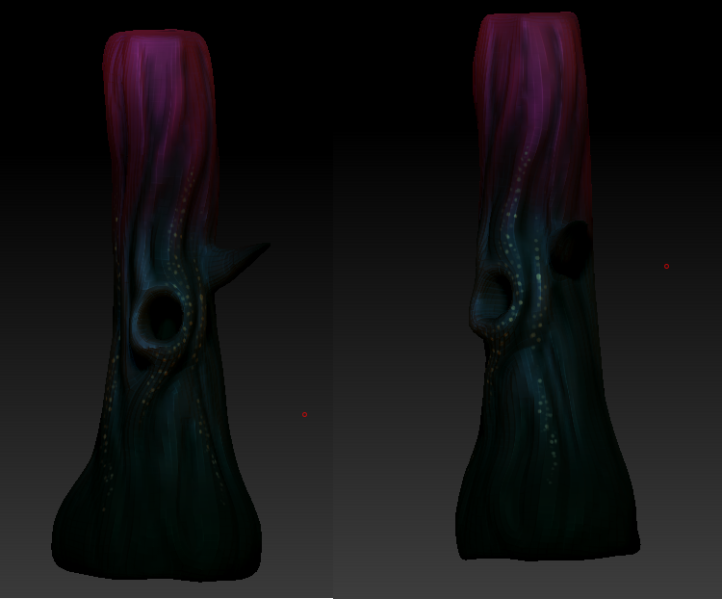 Then I figured to take it a bit further.  Because the colours pretty much make the scene, I thought I would try out and create foreground objects for the forest, such as the trees and colour them in a way that they would blend in perfectly with the 2D background.  This way I would be able to take the screenshots of the scenes and move about the trees to make it look like it’s a completely different background, while it’s really not.  It’s the same background, just the trees that are 3D are placed somewhere else.  These trees were made in Zbrush and also coloured there.  I thought colouring them in there would be the best option since Zbrush painting is like painting in photoshop for me and so the drawing style wouldn’t be that far off. 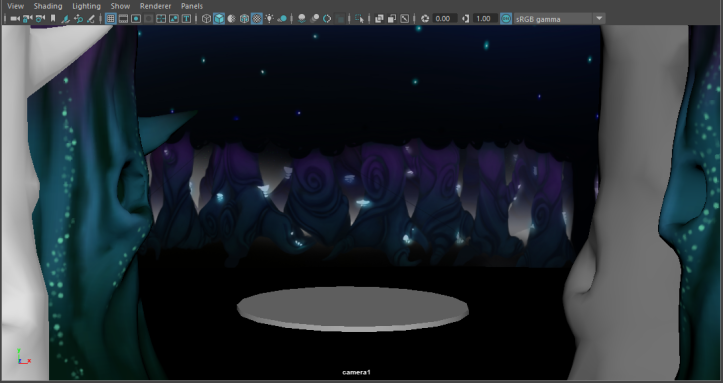 This is another screenshot of the lake scene.Here I’ve placed the 3D trees in the foreground, 2 are unpainted to show that they are 3D and I think that with lighting this idea could be very doable and in case I decide to change something in the scene later on in the animation process, I just have to load the scene up and can turn the scene or zoom in where need be without having to spend a few more hours to create a new illustration.
I’ll have to ask for feedback first before I go for this tactic.

3D facets.
With all the forest background stuff you’d almost forget about the 3D world that Sun is from. I did manage to finish the scenery for his world before we went on a break, leaving his home and himself to still be created in 3D.
I’m very happy that I started on the project whilst still in university because I ran into a huge issue when creating a tree and thankfully my tutors were able to help me out.  More about this later in this blog. 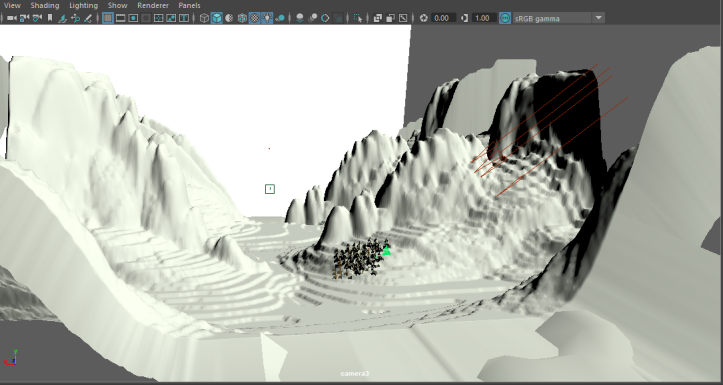 The mountains.   The mountains were much easier to make than I had expected.  I created a displacement map and this is the result.  Displacement map was created in Photoshop and after a few tests I did manage the create the mountains somewhat similar to what I had in the original draft for the first scene of the animation. 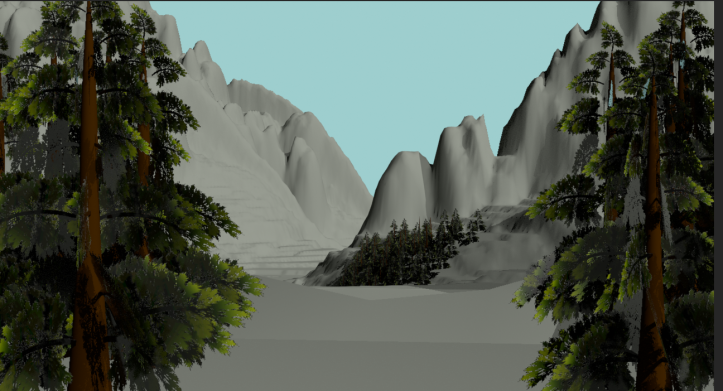 Because my trees are very low in their poly count, I was able to instance them without much issue and create a small scenery.  All that it needs now is a bit of paint and perhaps grass to bring the scene to life and it’s ready to create the first scene where the sun rises over the lands.

The house.
The original sketch for Sun’s home scene shows that he’s in a part of his home which functions as an observatory. A large telescope in the center of the room with some astrological features here and there. 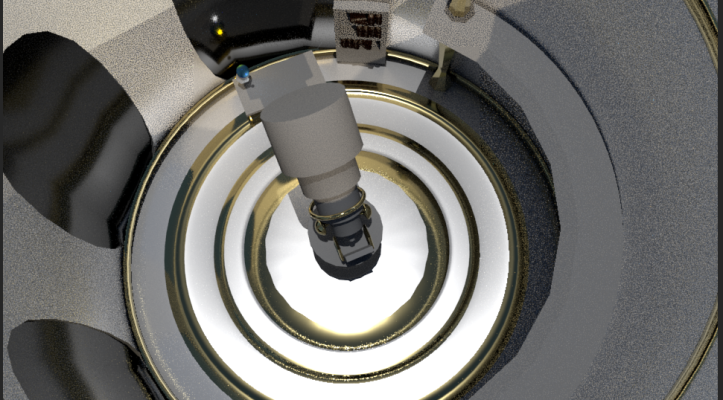 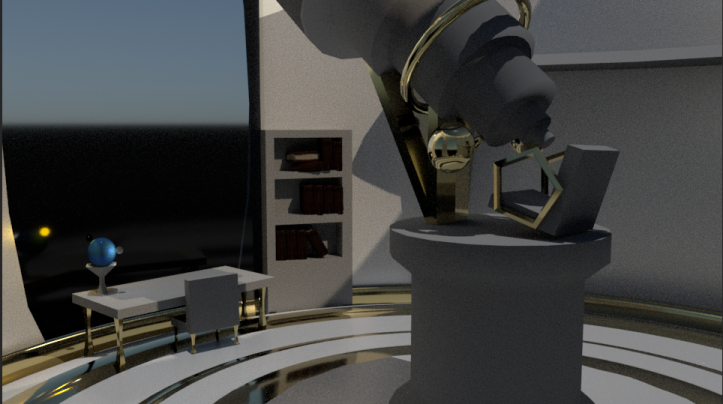 Sun’s observatory is the first time you see Sun, so I want it to be a piece that stands out.  With whites, oranges and gold, I made the home very low in poly, instanced anything that had to be doubled such as the books, the legs of the table and chair and the arms on the chair of the telescope. This because I want to go high with the textures.  Golds, lot of reflecting happening and if the first year “The Lair” project has taught me anything is that anything that reflects, takes forever to render. Before the vacation ends I want to have all the textures in place for the home so I can start animating Sun in it and get the first scenes in the 3D world done and rendering out by the end of January, that way I can focus completely on the 2D animations.

I had to finish the animatic one way or the other.  I noticed that I was hanging too long on the dance part of the whole film too much which kept me from doing anything else that had to do with the 2d part of the film.  So I decided to put together what I have so far and not put in the dance yet.  It might be a horrible thing to do, but I’m working with a very unforgiving deadline and I can’t waste time on this project.  Once I have the dance I can put it in the animatic and deliver it as a whole, but for now I’m focusing on everything else that isn’t related to the dance.. which is .. a lot of other things.

With the animatic done, I started on the scenes. Animating them in 2D just to get a feel of what everything will look like.

I’ve started with the scenes a little bit, just because I was curious about how the colours would look with background, so I decided to quickly hash something out and give it the primary colour with some shades.  I’m so excited now to get this done, the way things are looking is really what I had in mind.