For Sun and his world I have finished all the assets, backgrounds, lighting is all set up aswell and his rig is working as intended.  I’ve set up some animations to import as reference into the scenes and the easter break I’m using to render everything out.
I have playblasted the animatics of his scenes.  It’s just for timing and quick posing on where to place him best for the cameras /lighting.

I have also rendered out some shots already and am very happy with how they turned out.  The rendering times were horrendous, for one shot (my heaviest one with clouds and what not) it took my pc a day and a half to render out 120 frames. But they are done and I’m happy that I redone them because the flow of the moon going down in the distance is much better than it was in previous renders. 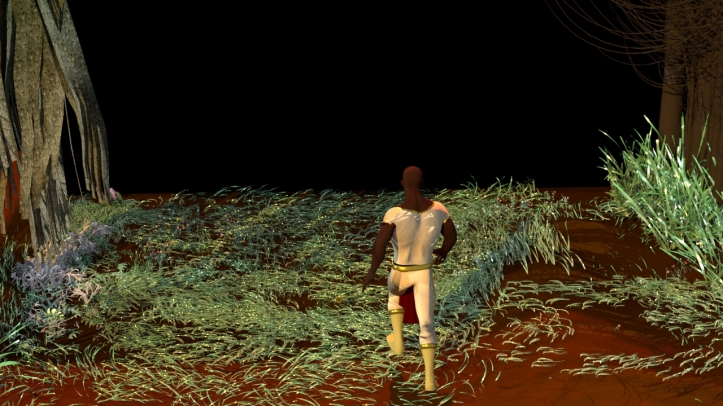 Aesthetically the scenes are what I was looking for.  The realm of Sun has the warmer colours, with golden tones whilst moon’s world has the colder colours and relates to a more feminine being to which that realm belongs.

Everything is falling together now and all that’s needed at this point is refining the animations and colouring.  I’m still working on the dance, but that’s also getting there.

One of the first year students who offered his help with colouring should be in uni during the easter break so I really hope that we can blast through the colours whilst I will be rendering out the scenes from Sun’s world which take forever and lag my pc so much I can barely animate.  So I’ve settled with some pen and paper animating just to get a few moves that I like on paper, train that brain memory and once the renders are done throw them into tvpaint.

Even though I have been really busy in the most inconvenient time of the uni year (last week of term.)  I know that the finished product of the film is only a few steps away and so I am not having the feeling that I won’t be able to finish it at all and feed myself the fear of failing the year.  I’m super positive about it and even when I haven’t met a deadline which was set for convenience, the two weeks should be more than enough to catch up and start the last term in a much calmer way.